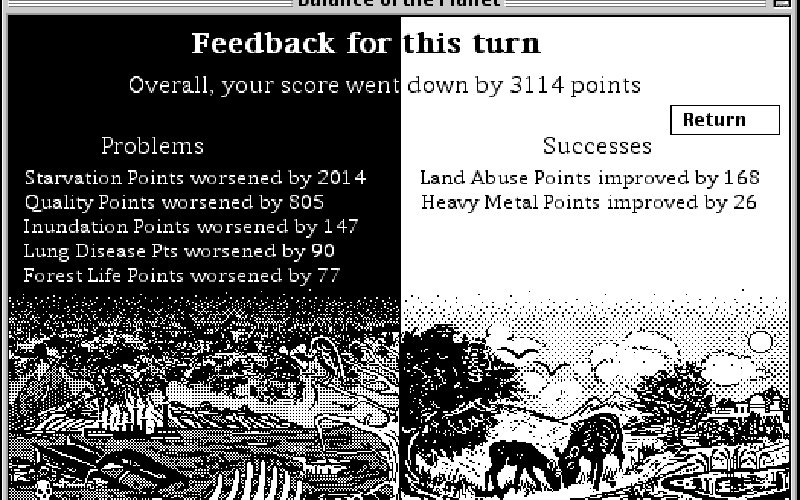 Balance of the Planet

Released in 1990, Chris Crawford’s Balance of the Planet is a policy simulation game that asks players to influence the development of the planet by demotivating or incentivising behaviour through taxes and subsidies.

How to Play: Today, you can play the game in your browser by heading over to the Internet Archive’s repository of the game. Take your time to explore the “ancient” game interface via the different options in the game menu on the top left. The game starts in the year 1990. The Results page (Keyboard shortcut “r”) shows you how you’re currently doing. Read and modify policies currently in effect on the Policy Sumary page (Keyboard shortcut “p”). Once you’re happy with your changes, click on “Execute Policies” in the menu (Keyboard shortcut “e”) to move ahead 5 years and see the new results. You only have 9 turns in total! For the extra-adventurous: Click on “Formulas” to modify how the game calculates the effects of your decisions.

Q & A: Chris Crawford will be answering questions about the game and its history on the Now Play This community forum. Just ask your questions in this thread – Chris will check in from time to time during the festival!

Chris Crawford sold his first computer game in 1978, joined Atari in 1979, and led Games Research there. During his time at Atari, he wrote The Art of Computer Game Design. After Atari collapsed in 1984, Chris became a freelance computer game designer. Chris has 14 published computer games to his credit—all of which he designed and programmed himself. He founded, edited, and wrote most of The Journal of Computer Game Design, the first periodical devoted to game design. He founded and led the Computer Game Developers’ Conference (now the Game Developers’ Conference) in its early years. Chris has lectured on game design and interactive storytelling at conferences and universities all over the world.

Chris is currently working on an new version of the game that will be made available for no charge at http://erasmatazz.com/ in a month or two.