Now Play This started in 2015 as an experiment for us and for Somerset House. A way to show that games had already moved past the “but is it art” conversation and was forming complex interrogations into all sorts of spaces. Over the years we’ve grown from a couple of rooms and a couple of days, to an expansive nine day festival of games, workshops, talks, walks and a conference! Co-founded by Holly Gramazio and V Buckenham with support from Sophie Sampson and Jo Summers, the team has grown and changed over the years. Below you can see what it looks like now. 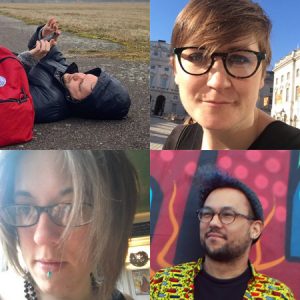 Director – Sebastian Quack works at the intersection of play, participation and the politics of urban society, as artist, game designer and curator.

Exec Producer – Sophie Sampson is a producer of interactive projects (both physical, digital and those that combine the two) specialising in culture, history and play.

Producer – Nick Murray is a producer, composer and artist making interactive sonic and narrative work focusing on loss and digital cultures. This often takes the form of games, interactive poetry and performance.

Now Play This is a Community Interest Company led by a Board of Trustees. Our trustees share responsibility for governing and directing the management of Now Play This,  working with the NPT team to lead the organisation in a conscientious and equal manner.