Each of the speakers has made games that are designed to be played with the whole of the human body – games where the play takes place in the movement and breath and steps and heartbeat of its players. They take the deeply fundamental experience of playing around in the world, jumping or touching or dancing or running, and – in a context where play among adults is often assumed to take place primarily on screens – wring it into new shapes.

Adriaan is a game designer whose experimental work includes games like Fingle, which plays with social proximity and awkwardness, and Bounden, a dancing game for two players with choreography by the Dutch National Ballet. His upcoming game Hidden Folks is showing at the festival.

Naomi is a writer and broadcaster whose novels include Disobedience and The Liars’ Gospel. She was lead writer on the alternate reality game Perplex City, and co-created the top-selling fitness game and audio adventure Zombies, Run!. Her recent work as a broadcaster includes an interactive audio history of interactive fiction.

Simon is a game designer who specialises in enabling people to play in real, social spaces. Previously, as half of Slingshot, he designed games like the cross-city chase game 2.8 Hours Later and The Black Maze, a biosensing game where players have only 1000 heartbeats to reach victory. His game Qubit, played inside a real quantum computer in the courtyard at Somerset House, is running at the festival on Saturday.

Saturday’s speakers all work in the landscape of their cities. They create work which responds to the buildings and people around them, and which recontextualises the familiar to create something extraordinary. They talked about their work, the discoveries it’s brought, and what it means to create playfully in, and in response to, a city.

Laura is an award winning Choreographer. She is a 2015 WIRED Magazine/The Space Creative Fellow and a 2011-2012 Fellow of the Clore Cultural Leadership Programme. Her Company, Guerilla Dance Project are an innovative dance company resident at the Pervasive Media Studio in Bristol who specialise in Augmented dance: the fusion between movement and technology.  Her recent work includes Crane Dance Bristol.

Matt is one of the founders of Blast Theory, renowned internationally as one of the most adventurous artists’ groups using interactive media, creating groundbreaking new forms of performance and interactive art. Drawing on popular culture and games, Blast Theory’s work often blurs the boundaries between the real and the fictional.

Sebastian is an artist, game designer and curator working at the intersection of play, participation and the politics of urban society. Sebastian is a founding member of artist group Invisible Playground, whose large-scale building game Just Add People  is running at the festival on Friday evening. His newest project, Playful Commons, explores what kind of licenses administrators and users of public spaces can agree on when allowing play to take place. 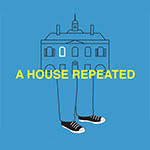 “Turns the concept of immersive theatre on its head… stunning in both its simplicity and power. ★★★★” — Londonist

A House Repeated uses the same basic method of interactivity as Kriebel’s earlier The Unbuilt Room, described here by arts journalist Bella Todd: “[you are] in an empty room with performer/writer Kriebel, who describes to you another, virtual space. There are stairs in front of you he might say, and doors to the right and left. What do you want to do? Each audience member answers in turn to progress the narrative through the network of rooms, so you have to keep a firm hold on your mental compass while listening out for potential solutions to apparent dead-ends and locked doors. Set entirely in a maze of Kriebel’s imagining, it’s a piece of promenade theatre you undertake without lifting a finger, and gaming-inspired performance in its purest form.” It is written by Seth Kriebel and performed by Kriebel and Zoe Bouras.